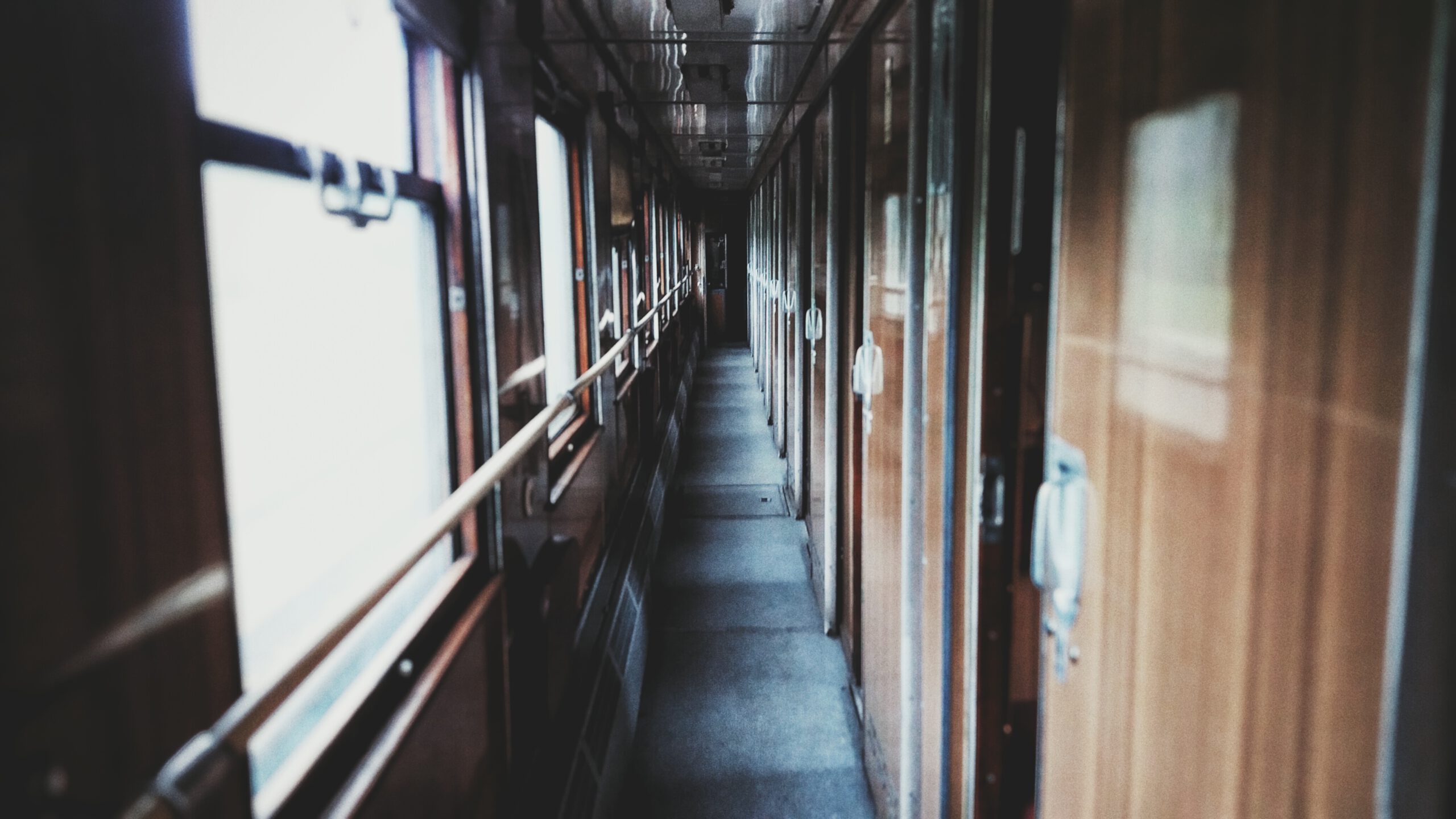 Listening to Patricia Highsmith’s Strangers on a Train

This post to The Eaves is a close reading of the pivotal scene of Patricia Highsmith’s 1950 debut novel Strangers on a Train.

TRIGGER WARNING: The scene discussed depicts a shooting. Do not read if you may find this upsetting.

SPOILER WARNING: This post assumes that you’ve read the book, or at least know the characters and the plot. For a synopsis of the plot, go here or indeed, just read the book and then come back to this.

Discussing Highsmith and sound may bring to mind the film adaptation of The Talented Mr Ripley, which is full of musical allusions that are used to portray characters and conflicts. While these are not actually to be found in the novel, Highsmith’s debut, Strangers on a Train, is subtly attuned to listening and to auditory technology: The final denouement of the novel hinges on an act of eavesdropping, telephones take on a sinister quality as Charley keeps calling Guy to remind him of their contract after he killed Miriam, and then of course, there is the scene analyzed in this post…

The murder of Samuel ’The Captain‘ Bruno by Guy Haines in Strangers on a Train, the centerpiece of the novel, is one of the most nightmarish and haunting murder scenes in literature; crafted extraordinarily well to create an extremely dense atmosphere of threat and confusion. In doing so, Highsmith places a special emphasis on hearing, it resonates in many ways. From the paranoid amplification of tiny sounds in the oppressive, dangerous silence of a sleeping house, over the deafening roar of the gunshots that end the life of Charley’s father and irrevocably change Guy’s, to the wail of sirens as Guy runs from the scene of the murder.

The whole scene is set up so Guy – and with him the reader – has to rely on auditory perception above all: He arrives at night, has to break into the house, careful not to rouse Charley’s father or his butler. With Guy feeling his way through the dark house, known to him only from Charley’s instructions to him, Highsmith is building the scene mainly in the auditory dimension – right up to its shocking climax, the gunshots:

”The room tore up with a roar. His fingers tightened in terror. The roar came again, as if the crust of the world burst.“

This eruption of noise has been set up throughout the entire scene: The carefully calculated weave of small sounds that accompanies Guy through the Brunos’s house – the ticking of clocks, the sigh on the main stairs, the chiming of the clock that camouflages the rattle of the door knob, the ”bump-bump“ of the closing door, the mere thought of the creaking stairwell Guy has been cautioned against, and the floor giving ”the tiniest wail of complaint“, completed eventually by ”a girl’s laugh, distant but clear and straight as a shot“ – are a way of amplifying those shots, emphasizing their violence and importance. Indeed, right before the description of the shots quoted above, Highsmith has lowered the volume of the narrative yet again, honing in on the faintest of sounds: ”He pulled the trigger. It made a mere click. He pulled again and it clicked. It was a trick! It was all false and didn’t even exist! Not even his standing here! He pulled the trigger again.” Only then does the roar of the gunshots erupt. This retardation, an absolutely masterful handling of suspense, shows not only how completely in control Highsmith is of her narrative, but it also confirms that hearing is the mode of perception that dominates this portion of the book. The entire passage in the hush of the night-time house tugs on the reader’s ear, and each of the noises is meaningful: the ticking and chiming of clocks are acoustic memento moris, the laugh of the girl outside simultaneously counterpoints and anticipates the sound of the shots. When Highsmith insists she is not a stylist, she underscores the fact that everything she writes serves the telling of the story or the portrayal of the characters – her distinctive voice is not stylish in the sense that it is not self-serving. Of course, the shattering loudness of the shots also propels the action, as it wakes up the butler who chases after Guy and calls the police, creating the soundscape of ”moaning“, ”shrieking“, and ”droning“ police sirens that dominates the following pages. As Guy flees through the night – ”running blindly“, as Highsmith points out – , haunted by the howling cacophony of those sirens, the reader begins to feel her own ears ringing.

All of this is in stark contrast to the first murder described in the book: Charley Bruno’s killing Guy’s ex-wife Miriam – throttling her with his bare hands – is in many ways a quieting of his victim and Highsmith describes it as an eerily swift and noiseless business, offset against the carefree, humdrum noise of the amusement park and marked mostly by its repulsive corporeality. This may provide a first clue to Highsmith placing special emphasis on the auditory in the second murder scene of the novel: There is a strong connection between sound and intimacy in literature, and Jean-Luc Nancy points out in Listening: ”auricular confession corresponds to a secret intimacy of sin and forgiveness”. This trope is not arbitrarily related to the murder of Samuel Bruno through a noisy murder weapon: Committing a murder seems to be a strangely intimate business in literature and especially for Highsmith’s protagonists, it often mingles with the erotic: Tom Ripley literally kills his darlings, and in Strangers on a Train, the murder plot is not just entwined with Guy’s relationship to Anne and Charley’s – somewhat creepy – love for his mother, but there is even a moment when Guy imagines Charley and himself looking like lovers to the other guests in a bar.

Beyond this rather indirect connection of sound, intimacy, and crime; the scene is charged with the history of the auditory in literature. Highsmith is drawing on various famous literary murders, almost like tipping her hat in this very first novel of hers to the authors who influenced and inspired her: The moment Guy hesitates in front of The Captain’s bedroom and imagines his victim standing on the other side of the door, holding his breath just like Guy, mirrors the situation in Crime and Punishment in which Raskolnikov and Alyona Ivanovna, the money-lender, actually do stand listening on opposite sides of the door before Raskolnikov enters the flat and murders Ivanovna. And while it is no surprise that Highsmith relates to Dostoyevsky’s meditation on trespassing and repentance, guiltand redemption, she also quotes a piece of classic horror literature that gives a clue as to her use and understanding of auditory tropes: The entering of the dark bedroom where the old man lies sleeping, with Guy edging the door open inch by inch, evokes E.A. Poe’s short story “The Tell-Tale Heart”, one of the most famously aural stories in literature. While Poe’s other famous ”sound piece”, the poem ”The Bells“, is an elaborate literary representation of the semantics and symbolism of church bells, the more typically dark ”Tell-Tale Heart“ showcases sound as the medium of the uncanny and hearing as the sense closest to madness. Indeed, this is more than an a priori taken from what media theorist Jonathan Sterne calls ”the audio-visual litany“, rather it is based on a metaphorical tradition: The connection between the auditory and the uncanny can frequently be found in literature. Thomas De Quincey develops a series of eerie sound effects such as the sigh, the knock, the footstep, and ”the solemn wind“ to create uncanny atmospheres. Gaston Bachelard quotes Toby Marcelin on a listening that is ”flush with madness” – ”And so the situation grows more dramatic, and fear becomes exaggerated. But where is the fear that does not become exaggerated? In this spirit of shared trepidation, the phenomenologist listens intently, as the poet Thoby Marcelin puts it, ’flush with madness.‘“ – while Walter Benjamin writes in his ”Reflections on Kafka” – another author of paranoid listening, uncanny telephones, and unlikely singers – that ”he who listens hard doesn’t see”. With sound literally traveling through the body, it serves authors in situations in which the boundaries between inside and out blur. Poe’s murderer is driven to confession – and madness – by a tell-tale heart that is merely pounding in his guilty conscience, while Highsmith poises her narrative between Guy’s intense awareness of the situation, alternating with a sense of dreamlike irreality, that leaves her protagonist as well as the reader constantly on edge, confused, and alarmed. The scene is not only unsettling because it places the reader in the shoes of a killer, but because Guy’s state of mind is conveyed so contagiously. In a way, Highsmith turns Benjamin’s suggestion that ”he who listens hard doesn’t see” on its head, by making the auditory overwhelm of this scene and the impossibility of seeing clearly in the dark of night an expression and a consequence of Guy losing his way in a more metaphorical sense. As Guy scales the wall of the property to escape from the butler and heads into the woods, Highsmith writes: ”Darkness ran up higher and higher about him“, and while Guy’s struggling through the dark forest may be a rather too obvious allusion to the opening of Dante’s Divine Comedy, it is another beautiful – and knowledgable – elaboration of the imagery that permeates the entire scene. Clearly, the play of light and dark, seeing and hearing is structurally underscoring the scene’s narrative function: The night of the murder is not only the central and pivotal moment of the book, it is a crisis for its main character; Guy has revoked a social contract, he has betrayed his own values and morals, and given up a future that might have been bright. Indeed Guy, the architect, is a character rather dominated by the visual, who describes his beloved Anne as ”golden, full of light“. Throughout the novel, the moral confusion ensuing from the involvement with Charley and the deterioration of Guy’s psychological state after the murder are counterpointed with his building of the Palmyra country club, the realization of his architectural vision.

Consequently, Highsmith sets the stage for his irredeemable trespass in the darkness. The ensuing emphasis on sound and listening implies a variety of themes and motives that potentially anticipate subjects that are to become essential to Highsmith’s work; if one is sensitive to the auditory in literature. David Toop summarizes the tropes most commonly connected to the auditory ”in the narratives of myth and fiction“ as well as ”silent arts“ like painting: ”In such contexts, sound often functions as a metaphor for mystical revelation, instability, forbidden desires, disorder, formlessness, the supernatural, for the breaking of social taboos, the unknown, unconscious and extra-human.“ This description includes some of the most prevalent themes of Highsmith’s work: forbidden desires, the breaking of social taboos, the unknown and unconscious. And one might add: the – at least superficially – irrational. Highsmith’s writing is both irritating and intriguing because she refuses to provide explanations for the behaviors and feelings of her characters; in Strangers on a Train, she portrays Guy as being confused about his motives himself most of the time. It stands to reason that she would favor an epistemology of resonance rather than one of evidence. The murder of Samuel Bruno may be the scene that most clearly articulates this acoustemology of Highmith’s in her very first novel.