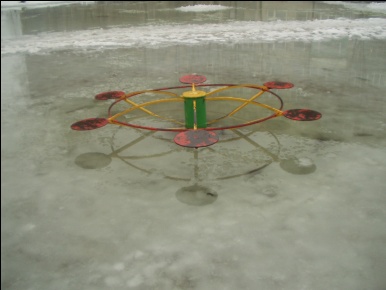 Sound and memory are intimately connected, both in literature and in philosophy: In “A Sketch of the Past”, Virginia Woolf dreams up a “plug in the wall” that would enable you to listen in on the past, and the perception of music has served as the epitome of the workings of memory for philosophers from Husserl to Nancy. Fran Tonkiss contends in “Aural Postcards – Sound, Memory and the City“ that listening is the sense of memory, which is attested to by terms such as “recall” and David Toop writes in Sinister Resonance – The Mediumship of the Listener: “What comes together through sound is emergent and passing time – a sense of duration, the field of memory”.
This field is the site of this month’s contribution to The Eaves: In her poem Playgrounds, which won the first prize in Musicworks‘ Sonic Geography Writing contest earlier this year, Ina Čiumakova explores the sounds of childhood and the soundscapes of memory. Playgrounds is inspired by a photo Ina took in 2005 of a frozen carousel.

Childhood has no single place,
No secret garden,
No single carousel to ride on,
Nor tree branch to fall from,
Just hours, that slip away.
So similar to music,
which has no place either
just passing time
it tries to keep up with.

In playgrounds,
kids run in circles
sliding down,
climbing up,
the imagined trees,
spaceships and horses.
Sounds of little shoes
against hard rocks and stones,
rain puddles. Splash!
Pure wonder, screams
Bruised knees, stopping them
yet again,
from another ride
On endlessly revolving carousel.
Sweet squeaking melodies.
No music is without accidents,
specially, if for a while abandoned.

After a deep breath,
One more swing,
yet another jump,
a hit of wooden sword. Trash!
Wind in the ears. Sometimes
a birdsong.
The feeling of adventure.
Mothers voice,
right in the middle of
nomadic cloud cinema.
Another deep breath,
Dramatic decisions about
Sand castles
that silently collapse in
sudden rain.
Tomorrow they will
reappear again.
Dal segno al coda.

***
Surprise –
No rain today.
The town wears a fresh
uniform after a
snowfall.
Wild screams
absorbed in the white matter.
Lost toys, forgotten.
And quest, for protection
Of frozen sand castles, is announced.
–Hurrah!
The clouds are falling.
Divine are sounds,
descending from above.

***
Warm breath against the
winter freeze. No voice
is audible,
but stranger’s steps in snow.
The games have stopped,
in playground,
world turned to ice.
Surrounded by
stillness of it all,
I whisper without thinking:
–The North, if there’s no light left,
is such
a mystical place
to spend one’s time.
Delighted is the ear
to listen to the silence
of big skies.

Ina Čiumakova (1986) grew up in Šilutė, Lithuania, where she obtained a Bachelor’s in Philosophy from Vilnius University (2010), which was followed by a Master’s degree in Cultural Studies at the KU Leuven University (2016) in Belgium.
Ina was recently awarded with the Erasmus Mundus Excellence Scholarship for participation in the Media Arts Cultures program (2016-2018). The Joint Master’s degree allowed her to specialize in New Media Curation, Digital Heritage, Interactive Installation and Experience Design at several European Universities (University of Lodz in Poland, Aalborg University in Denmark and Donau-Universität Krems in Austria).
She has worked both as a curatorial assistant and as an artist residency assistant throughout Europe.