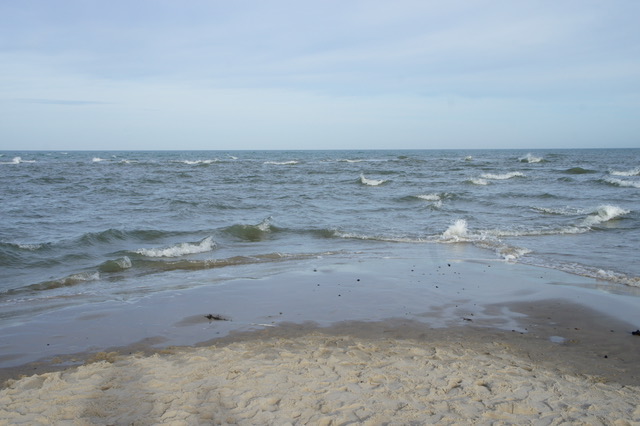 As I continue walking on the beach, my breath constantly being taken away by the sudden gusts of wind, I follow the guidance of the celestial and coastal lines. It takes a great effort to orient oneself in this immense space by only using the inner aural compass. I normally get confused and wander in circles if trying to find my way to the sea with my eyes closed. The sea sings right into my left ear, with steady humming, rather soft tune. Reappearing heavy beats originate from massive waves collapsing into the shore. Amplified movement of water resonates with my heartbeat and overwhelms me. I think the sea is complaining tonight, her rhythm is gently cacophonous. She’s sending anxious signals of her muted voice, that sounds like broken radio frequencies, filled with multiple on-air messages. One has to internalise these quickly dissolving sonic declarations before decoding them. But then, there’s another wave following…

The sonorous metaphysics of nature could probably be summed up in her acting as whole, as ensemble, as organic orchestra. Humans are able to appreciate nature’s polyphony to the highest degree. Subtly proportioned undulations of the natural world, multiple layers of intertwined tones, profound pulsation, changing moods… Something we will never own, but will continue imitating. Her non-articulated language will always end harmoniously, irregularity of expression will have a soothing effect. I do not know, I cannot decide, if I want to follow nature’s manuscripts for making music, or rebel in response to her majesty, and invent personalised instruments, rhythms and patterns. Human nature is filled with desire for disobedience, for negotiation, for transgression. Our ears seek to experience unheard sonic horizons. We sink into artificial electronic noises, full of glitches and mathematical imprecisions. We are pirates of our own minds. We binge on alternating states of plunderphonic exaggerations, on monotones of techno, the feeling of displacement that we are offered while listening to music.

We refuse to use nature’s beautifully designed sonic ready-mades, simply because we are mesmerised with vibrations of imperfection, unpredictable pitches of fresh, unrecognisable voices and sounds. We record nervously rotating computer fans, burning toasters, traffic light signals, construction sites, and use empty laundry machines of our basements for our newest compositions. This happens not because we are bored with ourselves and our environment, but because we are destined to hear and listen. Our ears crave for sonic magic – the wider spectrum, the better. The ears need to travel, someone said recently. This is a sonic metaphysical condition of almost every human—we need to expand our audible horizon. And yet…

As I continue walking on the beach, I still hear the hissing wind and palpitating sea beating against the rocks. The water waves that were anxiously stretching across my path, now sound calmer. The night has descended, silencing all audible conversations. The water had almost reached my feet, but sea’s broken, unarticulated message slipped into the darkness with the night, fully uncomprehended. Composer’s ear always tries to catch these changes in intonation. It is in these moments, that we begin our sonic voyages.

Ina Čiumakova (1986) grew up in Šilutė, Lithuania, where she obtained a Bachelor’s in Philosophy from Vilnius University (2010), which was followed by a Master’s degree in Cultural Studies at the KU Leuven University (2016) in Belgium.
Ina was recently awarded with the Erasmus Mundus Excellence Scholarship for participation in the
Media Arts Cultures program (2016-2018). The Joint Master’s degree allowed her to specialize in New Media Curation, Digital Heritage, Interactive Installation and Experience Design at several European Universities (University of Lodz in Poland, Aalborg University in Denmark and Donau-Universität Krems in Austria).
She has worked both as a curatorial assistant and as an artist residency assistant throughout Europe.